“On 22nd June we were lucky enough to arrange a ‘Twitterview’ with Patrick Ness, ahead of his Carnegie win.  Being relatively new to Twitter, he was keen to give it a go and we were supported by the new media team at his publisher, Walker.  Before the event, we agreed times and organised how it would be conducted, with just two people typing at this end so that the stream was manageable. We also agreed on a hashtag.  I also set up a TwapperKeeper (www.twapperkeeper.com) archive so that I could record the conversation.  We packed our huge Carnegie group into a classroom and projected the chat up onto the board so that everyone could see what was said, and settled in with doughnuts!  I prepared a document with pre-typed questions that the students had contributed, which already included the relevant details, for example ‘@Patrick_Ness Abi – How could you kill Manchee?!  #nessvisit’  This way, I was able to alternate on the spot questions with those ready prepared, without having everyone waiting too long.  Patrick was fantastic, friendly and conversational, answering questions as fully as he could.  The event was a huge success and the students really enjoyed it, though took to shouting at poor Will, who was in charge of refreshing the page whenever notice of a new tweet appeared.  My one word of warning would be to not expect this to be a quiet experience at all, particularly with a large, confident group!  In fact, several students commented that they preferred this to a regular author event because they could talk all the way through and discuss the answers without seeming rude.  I’ll definitely be organising more events like this in future.  Our sincere thanks go to Patrick Ness for giving us his time.” 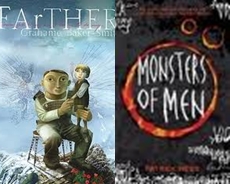 Congratulations to the winning authors of the prestigious Carnegie and Greenaway Awards this year.  Patrick Ness won the Carnegie Medal  for the last brilliant book in his trilogy ‘Chaos Walking’, and Grahame Baker-Smith won the Greenaway Medal for the beautiful picture book ‘FArTHER’.  An interview with Patrick Ness in the Independent questions why he puts violence into his teenage books, to which Patrick has some very interesting answers.  Patrick Ness’s acceptance speech can be found in this article in the Guardian, in which he makes an amazing, passionate defence of libraries, and school libraries in particular.  Patrick refers to himself as ‘the child that libraries built’ and says ‘That’s what librarians do.  They open up the world.  Because knowledge is useless if you don’t know how to find it, if you don’t even know where to begin to look’.  The speech is well worth reading, and passing on to everyone who matters in your school.  It’s been a year where authors are speaking out for school libraries – Michael Morpurgo, then Julia Donaldson, and now Patrick Ness.  Lets hope Ed Vaizey and Michael Gove are listening!

Michael Morpurgo wins the Red House Award for the third time with his book Shadow. This award is voted for solely by children. The book is about a boy from Afghanistan who is befriended by a dog when he is fleeing the horrors of war. See this report in the Guardian for more information,  and also the Red House Book site.  Morpurgo is a very popular children’s author, who has already given us the wonderful War Horse, as well as Private Peaceful,  and Kensuke’s Kingdom amongst others. 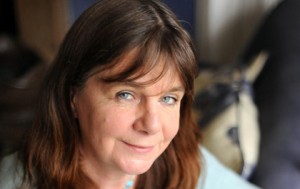 As you probably know by now, the new Children’s Laureate has been announced as Julia Donaldson.  She is the wonderful author of the Gruffalo, amongst other books, and she is also a library campaigner.  Read a blog post from Tricia Adams from the SLA who was at the ceremony and witnessed Julia promising to speak against the closure of libraries.  Let’s hope she gets on board with the school library agenda as well!  A statement of support from Julia for those excellent campaigners against the closure of public libraries,  Voices for the Library, can be found here, which expands further on her feelings on the important role that libraries play in the future of our children.