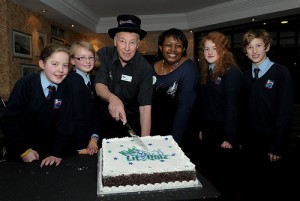 Helen Farrar, school librarian at Cockermouth school, reports: On 6th December 2012 the team from Cockermouth School, Cumbria, won the UK final of the Kids’ Lit Quiz in Coventry. Comprising two Y7 pupils and two Y8 pupils the team won by a narrow margin of two points (one question!). The Cherwell School, Oxon, come second having gone to a sudden death play-off with St Thomas More School, Yorks, who were placed third and Junior King’s School, Kent, came fourth. It was a closely fought competition with lots of authors turning out to support the teams, Malorie Blackman as Guest of Honour and Alec Williams as MC. This is the second time Cockermouth School has won the UK final and in July 2013 they will hopefully be off to Durban, SA, to the world final.  Pictured are: Eve, Alex, Madeleine and Adam with Malorie Blackman and Quizmaster Wayne Mills