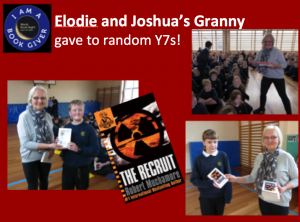 Last year, Backwell School Librarian, Anne Gibson was chosen to give Ness’s The knife of never letting go to teachers at her school (knowing they have little time to read for pleasure and concerned that they didn’t know how far teenage literature has come). Inspired by the runaway success of her actions (just about all teachers returned to the library desperate to borrow the following two books in the series and saying they had passed the book onto family and students) she decided to tackle 6th formers this year. Thrilled to see Matt Haig’s The Humans on the list, she encouraged four teachers to join her in applying to be “givers”. Each chose their favorite title which they also thought would appeal to 6th formers who are rarely seen reading for pleasure about school. She publicized the lunchtime event on the common room plasma screen and assembly on the day, setting up a display with sweets to encourage takers in the common room. Unbelievably, 10 minutes later it was all over! The only things left on the stand were a few sweets! Two weeks later and students are telling staff what they enjoyed and who they have passed their book onto. Anne also received a surprise call from Elodie and Joshua’s granny asking to “give” WBN book, The Recruit by Robert Muchamore to boys in school as her granddaughter had told her that they are not keen readers! Mr Conkie’s marvelous Random Generator was used during a Y7 assembly to choose lucky recipients, both boys and girls (as we couldn’t think of a fairer way!). Library staff have noticed Robert Muchamore’s books disappearing from the shelves as a result and one girl told us she was borrowing for her Mum!! Next year Anne is planning to ask staff to be Community Givers, by donating a book from their own library to students in their tutor groups or houses. She aims to package them attractively to heighten interest. (Brown paper bags and badges are going to feature!) This will leave more books on the website for you to apply for. She thoroughly recommends having a go and encouraging staff and students to share and talk about books. The effects will last for weeks.  If you want to see more about Backwell School’s reading journey, visit their fantastic blog.