In an assembly which celebrated the importance and joy of reading  our younger pupils were entertained by two video clips which focused on the value of reading (one of which featured popular author John Green). Fourth form tutors and Library staff then joined together on stage to read out in turn inspirational (and moving) quotes about books and reading.

We had a select (but high quality) number of entries to the Library competition ‘In character’ where staff and pupils were invited to enter a photo of themselves dressed as a book character. We also had some very enthusiastic pupils coming in with armfuls of books to swap… and departing happy with armfuls of new books!( You can see two of the amazing entries beneath this article – one is a series of photos showing a pupil drinking Polyjuice Potion to transform into Bellatrix, and one is the Library Assistant, with family and friends, acting out The Railway Children.)

Elsewhere in school some of the MFL and Classics staff were keen to take the opportunity to read to the pupils. For example ‘Pablo diablo’ (Horrid Henry) was read in Spanish, and ‘Die kleine raupe Nimmersatt’ (Very hungry Caterpillar) in German! Classics staff also read their favourite myths and extracts from fiction set in Roman times.

“There are no days of our childhood lived so fully as those spent with a favourite book”. Marcel Proust 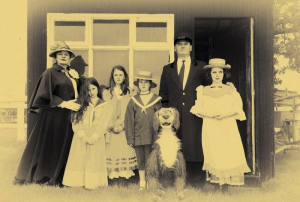