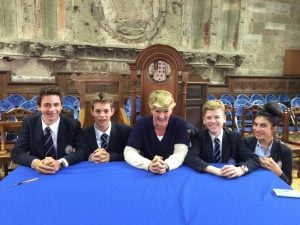 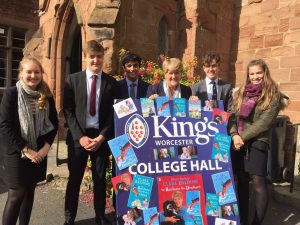 As told by librarian Annabel Jeffery:

‘On Tuesday October 3rd we were absolutely delighted to be chosen to host an author event with none other than Clare Balding. Pupils from all three foundation schools were present, along with children from three local primary schools. With so many young pupils queueing for signing and needing to be organised, we could not have done without the help of a group of U6 who enjoyed a rather different key Skills session to the Research Skills that was timetabled!  They were all fantastic on the day.

From the moment she arrived -to be greeted by a very excited and delightful U6 Reception Committee – to the moment she left after entertaining 500 children and staff in College Hall and signing 100s of books, she created a buzz wherever she went.  (Even in the cathedral cloisters where lucky visitors may have noticed her whilst passing by her as she ate her lunch and chatted to Sixth formers.)

Clare’s talk was full of enjoyable anecdotes about her childhood spent surrounded by animals, many of which taught her valuable life lessons (as well as being the inspiration for her new children’s books about racehorses), such as the importance of belief in yourself, doing what you enjoy, trying everything without fear of failure and not worrying about being different.   But the highlight was the way in which she engaged and interacted with the children.

College Hall will never see the likes again of Clare Balding cavorting with great drama and commitment on stage, to re-enact great sporting moments of recent times with the help of King’s St Albans children who were brilliant.  Firstly she re-staged the final of the triathlon world series in September 2016 when Jonny (played by Henry Hawes of KSA)  was helped over the line by his brother Alistair, thus illustrating the power of selflessness in sport.  Fen Harper and Martha Burden from St Albans (by chance in their hockey kit) then had the chance to act as the favoured Dutch hockey players in the Rio Olympic final, taking on Clare as Maddie Hinchliffe.  Despite their skill, Clare (as Maddie) proved that belief and preparation can help you to win against the odds.

She was also very brave in inviting up on stage young writers of the future from each school to interview them about their ideas for a story.  I don’t think she was expecting to have the kind of complex synopsis such as that given by Amalie Prewer-Jenkinson!

The line of pupils queueing patiently with books seemed to be endless, but Clare waited until the last book had been signed and the last pupil hoping for a selfie (each one granted) had turned up. She was even happy to give Miss Jeffery’s spaniel a birthday hug!

Clare Balding was a passionate and inspirational speaker, who will have left many of us with unforgettable memories of the day that she came to King’s.’